A Touch of Greatness: A History of Tennessee State University (2013)

A Touch of Greatness: A History of Tennessee State University is the first book covering the narrative history of the institution from 1909 to the present. TSU is one of America’s Historically Black Colleges and Universities. The TSU story is about the freedom of an institution of higher education; about the complex economic, political, psychological, and social forces that affected the institution as they would affect any institution in a dynamic, multi-racial society.

Finally, in one-volume, this narrative provides a comprehensive history of America’s Historically Black Colleges and Universities (HBCU’s). The book concludes that race, the Civil Rights movements, and black and white philanthropy had much effect on the development of these minority institutions. The book shows how black colleges began that arduous nineteenth-century journey, providing higher education for former slaves and their African-American descendants—as well as for other students, struggling for institutional survival most of the time, but adapted themselves to new missions and adjusted to recent and challenging developments in American higher education. Far from being just institutions of higher education, the HBCUs have helped to shape our culture and society 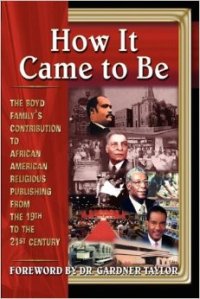 How It Came to Be serves as a continuation of how the Boyd family contributed to the development of religious publishing in the African-American context. It is a sequel to A Black Man’s Dream and covers essential details from R.H. Boyd’s seminal dream up to the present generation of Boyd leadership in the industry of religious publishing. In his keynote address to the 2004 National Baptist Sunday School and Baptist Training Union Congress, Dr. Gardner Taylor described the Boyd family as “four generations of prominence.”

The Civil Rights Movement in Tennessee: A Narrative History (2005)

Dr. Lovett presents a complex analysis of black experience in Nashville during the years between 1780 and 1930, exploring the impact of civil rights, education, politics, religion, business, and neighborhood development on this African-American community.

This book is a documented account of the life of Dr. Richard Henry Boyd and his struggle to establish the nation’s foremost African-American religious publishing company.

Profiles of African Americans in Tennessee (1996)